Born and raised in Dayton, Ohio, Mark attended Bowling Green State University and Sinclair Community College. In 1978 Mark moved to California to attend California Institute of the Arts where he studied in the Walt Disney Character Animation program. In 1980, Mark was hired by the Walt Disney Studios, Feature Animation department. His first animation assignment was animating Mickey Mouse in Mickey’s Christmas Carol. Since then, he has served as supervising animator on some of the studio’s major films including The Little Mermaid, Beauty and the Beast, Aladdin, The Lion King, and Mulan. He has served as an animation consultant on such films as Frozen and Big Hero Six. In 1999, Mark made his directorial debut with the award winning short John Henry. In 2013 Mark received the Winsor McCay award for lifetime achievement, ASIFA’s highest award in animation.

Mark started sculpting in 1998 as a way of expressing his interest in American history. “My goal is to create sculptures that depict the people and events that have shaped our nation.” Recently, Mark has added painting to his artistic repertoire as well as broadened his subject matter to include his passion for football, wildlife and his Christian faith.

In 2003, Mark was commissioned to create a life-size monument of the Wright Brothers for the city of Dayton, Ohio in celebration of the 100th anniversary of powered flight. His monument of Civil War drummer boy Willie Johnston is in the Santa Clarita Historical Veterans’ Plaza in Santa Clarita, California. His sculpture of President Lincoln, “Reviewing the Troops”, is part of the permanent collection at the Lincoln Presidential Library in Springfield, Illinois. Several of Mark’s sculptures and paintings can be found in corporate and private collections around the country.

Mark and his wife Debbie have two grown children and reside in southern California. 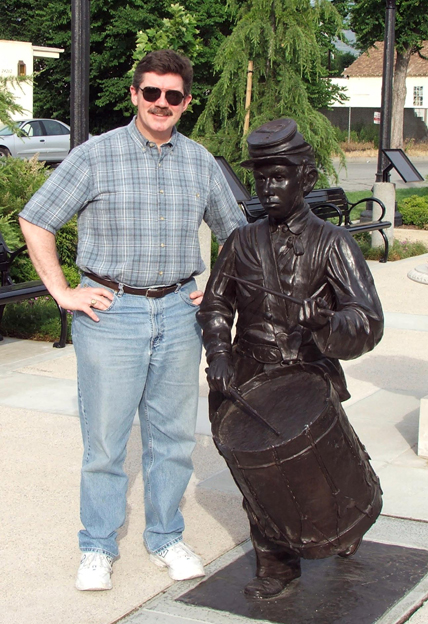